The Complete Fiddle Tunes I Either Did or Did Not Learn at the Tractor Tavern, by Gene Silberberg 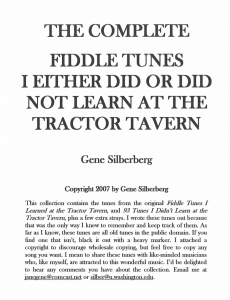 From the preface: “This collection contains the tunes in the original Fiddle Tunes I Learned at the Tractor Tavern and 93 Tunes I Didn’t Learn at the Tractor Tavern plus several other strays. I learned almost all these tunes at various jam sessions in the Seattle area: the Tractor Tavern, when it was running Monday night open band contra dances some years ago, the Northwest Folklife Festival held every Memorial Day weekend at the Seattle Center, the workshops and jam sessions at Centrum’s Festival of Fiddle Tunes in Port Townsend, Washington, Lottie Mott’s coffee house (now defunct) in the south end of town, the third Sunday open band contra dances, and the floating biweekly old-time jam sessions. I transcribed the tunes as they were played (omitting the obvious turnarounds), which, as everyone connected with fiddle music knows, sometimes is different than the way the tunes are played elsewhere, or by different fiddlers. We hope they usually have some connection to the way the tune was played originally.”

You can find this book, which is photocopied and spiral bound, at folk music festivals around the Pacific Northwest. I recently bought a copy on sale at NW Folklife for under $20, but if you can’t find one locally you can order one from Elderly for $35 (as of mid-2012).

As the excerpt above says, these are transcriptions of tunes as played around Seattle. As such, they may be helpful for learning how you might expect to hear the tunes at jam sessions in the area. It contains 569 tunes (according to the listing in the Elderly catalog, anyway — I don’t feel like counting the table of contents right now) in standard notation, mostly old-time, with suggested chords. The table of contents, although not the sheet music itself, lists the key and mode of each piece. There is also an introduction section with some information about music theory helpfully titled “Sex Tips For Fiddlers” to get your attention. This is a great repertoire book for PNW fiddlers.